In the world of Roblox, there is a game called Roblox High School which is known as the popular game made by Cindering in April 2009. This one is the high school roleplaying game with more than 524 million visits. It takes place in the small town featuring some places such as the club, the restaurants, the stores, and the other locations. Every player of the game is able to earn money and buy items such as cars, gear, pets, and many other ones.

There is an interesting thing about Roblox High School. It is the existence of a thing called Guest 666. What is Guest 666? The term Guest 666 is used to call the mysterious character. in the past, this one often tried to socialize with the other guests, but to o avail which eventually led to him being bullied due to his appearance. Since then, Guest 666 started to traumatize the school by murdering bullies. Basically, he started to traumatize them before murdering them and throwing their blood against the wall. 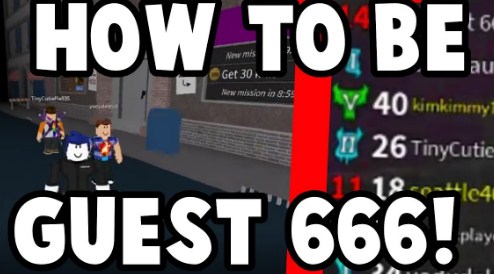 Guest 666 might looked scary but some people find him cool. For those who think the same, fortunately, you are able to be Guest 666. How is it possible? What should you do to make it possible?

Before anything, you have to know the appearance of Guest 666. Apparently, Guest 666 takes the edited version of the default skin. Guest 666 has the Roblox cap, red eyes, no visible mouth or hair, ghostly skin, the black Roblox shirt “Roblox” spray painted on it, clear jeans and snookers.

In order to get the look of Guest 666, here are the steps that you have to follow. First, go down to your avatar and click dress up. Second, click on Apparel. Third, look for the normal guest hat. It should be pretty simple to find. Fourth, take off everything you are wearing. Fifth, go ahead and copy the ID of Christmas – Guest Old Guest Old Guest Old and put it into the code box. By doing that step, you will have the Roblox shirt. Sixth, take off all of the body. Seventh, choose dark skin tone. There are not many color options so the best you can do is to choose the dark blue. Eighth, go to Apparel again and find the pants. You should be cut on all of the accessories because guest 666 is pretty simple. Ninth, go to the body and go to the face. Tenth, look up the Guest 666 face. There are multiple different phases for it but there is one set one. You can choose the two red eyes. Aside from that, you can also change the chat color to red. Please type “Guest 666” in the Nickname box and type something like “I’m evil” in the About Me box. After that, you can try to go around and mess with people. Does it sound fun to you? Try it now and enjoy the experience by being a Guest 666!

Leave a reply "How to Make Guest 666" Cancel reply