Supreme is known as the American skateboarding shop and clothing brand. This one was established in New York City in April 1994. The designer of the brand caters to the skateboarding, hip hop, and rock cultures, as well as the youth culture in general. They produce clothes and accessories and also manufactures skateboards. Everything from the shoes, clothing, to the accessories are sold extensively in the secondary market.

Supreme is really a popular brand. Its popularity has reached one of the largest platforms to play games called Roblox. In the world of Roblox, there are a lot of clothing made after the brand named Supreme. One of the most popular thing is shirt.

Supreme shirt can be described as the type of clothing on Roblox that can cover the torso and the arm body parts of the character with the texture defined by the ShirtTemplate property of the shirt. Every user of Roblox is able to create shirts by creating the image based on the template and then publish them using the shirt ContentBuilder. After being reviewed and approved by the moderator, the user is able to sell or use the shirt. Please remember that only the members of the Builders Club can make and sell the shirts for Robux, but everyone can buy them. 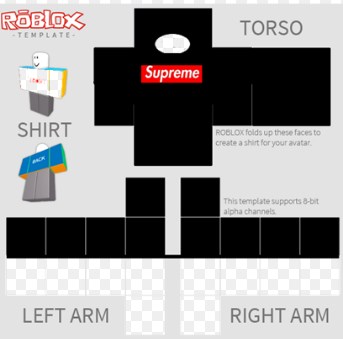 Black is one of the most favorite colors. In Roblox, there are some Supreme template shirts that you will be able to find. The first one is Supreme template created by PBG Official Group and was updated by PaPy_Goat on January 27, 2019. This one is the Supreme template shirt dominated by the black color. At the right and left side, the arm sides for the exact, you will be able to see the red lines. Another thing that makes the shirt more interesting is the Supreme trademark located at the center of the shirt. The Roblox ID of the item is 1363888058. As for the price, it costs R$ 7.

The second one is Supreme Template created by lostweab. This one was updated on November 19, 2018. Everything is black, except from the red and white “Supreme” mark on the center of the shirt. It looks simple yet expensive. How much does it costs? The price of this item is only R$ 5. The Roblox ID of this item is 2582910455.

There are some other Supreme template shirts on Roblox. The color of them are mostly red. If you are interested in the red ones, you can go straight to the Roblox Catalog. When you are there, you can use the Search bar in order to make everything easier and faster. Please type “Supreme template shirt” and you will be able to see the result that you are looking for.