Some people may not know what to do if this issue happens. It is because they are afraid that they do some mistakes and instead of fixing it, they add the issue. But, some other Roblox players try to fix it such as rebooting their computer, uninstall Roblox Studio and reinstall it and some other simple methods. You can also try to fix it by using these two methods. But in the next paragraph, we are going to explain some stories from other Roblox Studio users who also face Bad Allocation error. 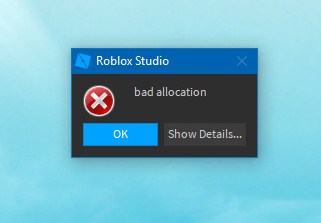 Some other Roblox Studio users think that this issue happens because of high RAM usage when testing. So, there must be something to do with it. Some others also say that this issue can happen because of a massive amount of items in ReplicatedStorage so it causes the error and crashes. Other sources state that this problem happens because of 32 bit application which is limited on memory and Bad Allocation in the pop up message that you receive means the program cannot allocate memory.

A Roblox Staff in devforun.roblox.com gives some statements about it. He says that in Roblox Studio, there is no limit but those imposed by OS. He suspects that this issue happened for some reasons so that it is unable to get enough memory for it to work. It seems that there must be something to do with crossing 8GB. Furthermore, he also says that after opening the game, the usage of memory for Studio will go up to 3G+ and since Roblox Studio on Windows is a 32bit application, even though 4G is the theoretical upper limit, but 3G+ is dangerous. Then, Roblox Studio probably will fail randomly when some memory allocation fails. For now, it is some hard limit for Roblox Studio on Windows but Roblox Studio on Mac is 64bit. So, if you face this problem on Windows and you have Mac at your home, you are able to try to open the large game on Mac.

For further information about Bad Allocation error, you can access devforum.roblox.com. If you have any other questions related to it, you are able to ask it in that forum.