If you want to launch the Animation Maker, you have to click on Animation Editor button in Roblox Studio and you can find it in the Plugins tab. After that, you have to choose the rig to be able to define animations for. Then, click OK in the dialog and the editor will open.

Now, how to make an animation? If you want to animate a rig, you will have to define poses by moving or rotating specific parts such as torso, head, foot, hand and so on. When the animation runs, then it will animate the rig from pose to pose smoothly. You have to consider a simple animation where a human character turns its head 45˚ to the left. This animation will involve two poses including the initial position of the head and the turned position of the head. 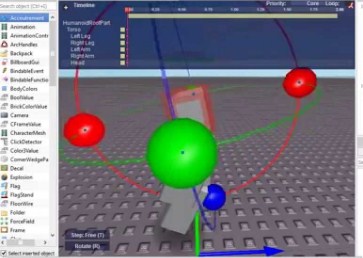 If you want to create a new pose, follow the steps below.

An animation will start with a total duration of 2 seconds by default. If you want to add or remove time, you are able to enter a new value in total seconds in the right side box of the Time indicator. You are also able to add or remove time from the current position of the scrubber bar by choosing Edit, Add Time At Cursor or Remove Time At Cursor. You need to know that if you remove a block of time, keyframes within it will not be deleted permanently but rather hidden. If you re-include that block of time, it will restore those keyframes to their relative position in the timeline.