Aimbot is defined as a hack which allows the player to shoot in any direction, but still hit the chosen target. Aimbot is often used in a first person shooter games and even sometimes it is used together with a TriggerBot where it will shoot automatically when an opponent comes up within the field of view or aiming reticule of the player. If you use aimbot, usually it will rely on each client computer of the player which receives information about all other players, whether they are visible from the position of player or not. 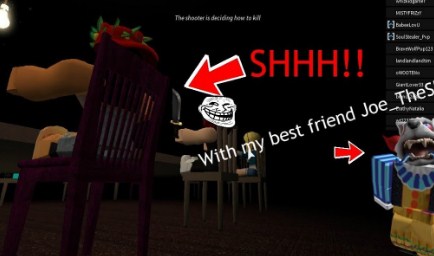 In Roblox, Breaking Point is a horror game which was made by Paradox. On February 8th, 2017, this game was created and when this article was being created, the last update of this game was on August 5th, 2019. Breaking Point game is able to be played by 16 maximum players in each server. This game is one of successful games in Roblox because in two years it has been visited more than 154.8 million times. Besides, this game has also been favorite more than 1.3 million times and has more than 445K likes.

There are three game passes that you are able to buy in this game including Radio for R$ 450, VIP for R$ 350, and also Knife Trail for R$ 150. After being updated, this game now is in V8.2 and there are default theme, new command which is !join mode-name and some fixes.

How about Breaking Point Aimbot? If you try to search Breaking Point Aimbot in V3rmillion.net, you are able to find a thread about it. In that forum, someone informs you about Semi Aimbot. Why is the name Semi Aimbot? Because the aimbot is not exactly an aimbot and it will not target automatically and will not kill immediately. By using this semi aimbot, you need to aim yourself but your throwing knife will be in 10 times easier since the head of enemy will be large. You will also get not only points for murder but also points and for a headshot. By using this semi aimbot, you sometimes need to restart the script but it will not break the game and everything will be fine as long as you do not change the size of the head. The script of the semi aimbot is here.

for _, v in pairs(game:GetService(“Players”):GetPlayers()) do

if v.Name ̴= game:GetService(“Players”).LocalPlayer.Name then