Big Paintball is an FPS game in Roblox and it can be played by 18 players in each server. Now, this game has been visited more than 142 million times. In this game, you will have weapons so it is important for you to know the weapons that you are able to find in this game and also the best gun that you can have.

There are a lot of weapons which are available in this game and some of them are as listed below.

This gun will be owned by everyone when they begin the game. This gun is a semi-automatic gun with medium range and paintball speed. 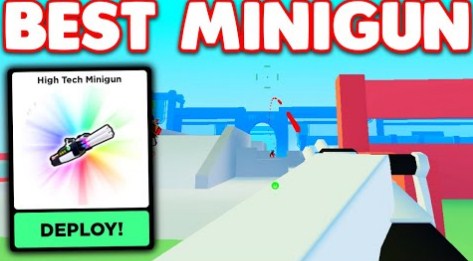 This gun is a semi automatic paintball gun with really good range and good projectile speed. If you are a new player, this gun is the best gun that you are able to buy because it easily wins compared to other cheap weapons. Also, this gun is powerful in FFA due to its good range.

It is an automatic paintball gun with the similar range and paintball speed as Default, except with a higher firerate.

It is a spray and pray weapon which is an automatic paintball gun with awesome fire rate. But, the range and paintball speed of this gun are very poor. This gun is very good close range but it is easily countered at longer ranges by using long-range guns like the deagle.

This gun has a good firerate and good range that is on par with the Deagle.

It is a cheap SMG and it has very fast fire rate but bad damage. This gun is very good at close range and good at medium range if you are able to aim well. However, it shows poorly at long range since the bullets fall really fast. You are able to use it if you are a new player.

It is a high quality assault rifle and fully automatic which has good fire rate. It is amazing at medium range and good at close and long range as well. If you are able to use it correctly, this gun can be considered as one of the best weapons in the game.

It has a super fast rate of fire but a very serious downside is the range and bullet drop. If you are able to learn to compensate by aiming higher, it can be a good weapon to use.

Actually, there are still more weapons in this game such as Tommy, M249, Dual Deagles, Scout, P90, Silenced Pistol, Dual Pistols, Sniper, Toon Gun, Flame Gun, Freeze Gun, Raygun and Dual Rayguns. So, what is the best gun in this game? If we talk about the best guns, there are some of them and you may be able to buy them. Those are:

Do you want to know the other best guns in the game, you can discuss it in the forum with other players.