What comes on your mind when you hear about John Doe? Some of you may not know who John Doe is. Well, John Doe is an account that was made by Roblox creators as an account for testing Roblox. However, the name John Doe is often used by people as title in videos as clickbait videos.

Why can the name of John Doe attract people to watch videos with John Doe name? It is because this name is also often mentioned in a lot of different fake ‘hacker’ stories in Roblox. In Roblox Creepypasta Wiki, you are able to find some rumors and also mysterious stories about John Doe. As we know that a lot of people like creepy and mysterious stories so that everything about John Doe will be interesting for people. 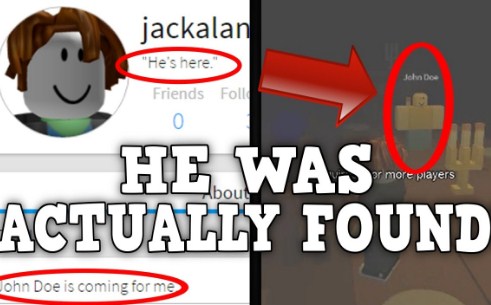 Actually, John Doe account was created by David Baszucki and Erik Cassel on June 25th, 2005 but you are able to see that the join date is listed as February 27th, 2006. The name of John Doe refers to a male which is anonymous and he has a user ID #2 in Roblox. For your information, In the beginning of Roblox, John Doe account was used by the administrators of Roblox to accompany users playing Roblox so no wonder why John Doe sometimes popped up in a game to greet Roblox users. When someone entered a game, the administrators would cease their current work and then join the game of player. It is known that John Doe account was last online on March 18th, 2016 at 6:04 PM. Before this last online, John Doe was last seen online on February 27th, 2006 at 3:06 PM, it happened when Roblox officially left the alpha testing stage. So, a lot of Roblox users thought that these two accounts were accessed by password guessers.