Roblox is the name of the online game where people are able to hang out and have fun while being creative. However, there are a lot of young children who play on the platform, and they may be susceptible to the dangers of the internet. As the existence of predators and scammers on the social media is nothing new, they are also prevalent in online games as well.

In case you ever happen to come across a rude person while playing a game, please report them. If this kind of thing is getting out of hand, it is better for you to just leave. If you are brave enough to kick them out or ban them from the server, do so. Reporting someone is able to essentially help if they are an exploiter. The term exploiter is used to call someone who hacks into the game files and makes changes to them. Exploiters range from major incidents to minor ones. 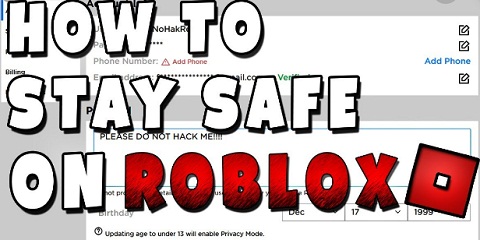 The second tip to be safe on Roblox is to not fall for scams. An instance of a scam would be someone who offers you a valuable item for the currency. After the trade, they will get your items, but you will not get theirs. Another example would be trading accounts. There is also a possibility of you losing your account, while the person could be ruining your account.

The third one is to not listen to people like that they are wrong and you might get banned from Roblox and you will not be able to play on your own account for a could of days or a week. The fourth one is to not kill people for no reason, unless you are on a fighting game. The fifth one is to not say or build anything mean or bad if you are building.

The sixth one is to not ask for boyfriends or girlfriends. You will get problem or reported. This kind of thing would also make you an Online Dater or ODer, that Roblox has strict rules about, and the community dislikes them harshly as well.

The seventh one is t0o not curse or say bad words. Cursing or saying bad words could result in a warning most of the time, but if it gets out of hand, it could result in a temporary ban. The eighth one is to not spawn kill. Spawn killing is the moment when a player kills another player who has just spawned from death of joining the game.

The ninth one is to not be gross or inappropriate. The last tip to be safe on Roblox is to not share the passwords. If someone asks you for your password, they are trying to steal your Roblox account. Another possible way people get their password exposed is when the password is not that secure. In this case, all that you have to do is to make sure to put a random combination of uppercase and lowercase letters and numbers.