You maybe like playing Breaking Point games on Roblox and now you are looking for information about the GUI of this game. Well, you come to the right site and read the right article, too. In this article, we are going to inform you about Breaking Point GUI Roblox.

Breaking Point is a game in Roblox which is categorized into a horror genre. This game was created by Paradox on February 8th, 2017 and the last update of the game when this article was being created was on August 4th, 2019. This game can be played by 16 maximum players and until now, this game has been visited more than 154.4 million times. This is an amazing number, isn’t it? Now, this game also has more than 1.3 million favorites and more than 445K likes. 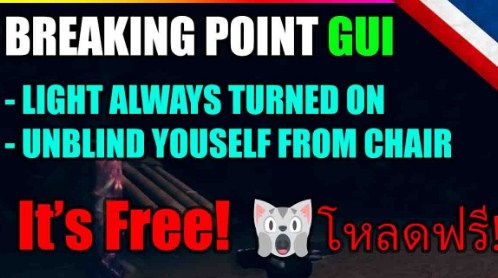 In this game, you are able to play it with other players because it is a multiplayer game and in the game you and other players will sit in a table trying to kill each other. The winner of the game is the last standing player. In this game, there are several Game modes such as Russian Roulette, Who Did It, Duel Vote, Breaking Point, Duck Duck Stab, Free For All, Juggernaut, Hot Potato, BP Pillars, Gunslinger, Kill Row, Everything, Musical Chairs, and A Turn For The Worst.

Now, what is GUI? And where can we find Breaking Point GUI? GUI stands for Graphical User Interface and it can be defined as something that is used to display information about the game to the player. It can be used to show player what the level, health and gold of their character. Also, it can be used to create in-game buttons for menus and inventory systems.

In Roblox, there are two types of Roblox including the game (core) GUIs which are not able to be edited in game and player GUIs which are able to be custom-made. The game GUI cannot be edited because they are locked in the GuiRoot. The game GUI includes your health bar, Leaderboard, the chat interface, the icons of your tool, the report button, the camera view buttons and the window buttons. Meanwhile, player GUIs has two types including ScreenGui which stick to the front of the game on your screen and BillboardGui which are attached to a brick and always face towards the player.