Roblox Wolves Life Beta is the name of the game on one of the biggest platforms to play games called Roblox. This game was created by the creator named Shyfoox Studio on April 14, 2018. Since the first time its release to the public, the game has been played 2,061 times, has been favorited by 209,702, and has gained more than 24.1M. By seeing the statistics, you can see how popular this game is.

In the game called Roblox Wolves Life Beta, you are able to design your own wolf and explore the big map full of surprises. There are tons of accessories and options in order to make your wolf super unique. Aside from that, you can also claim your own den and adopt the adorable puppies. 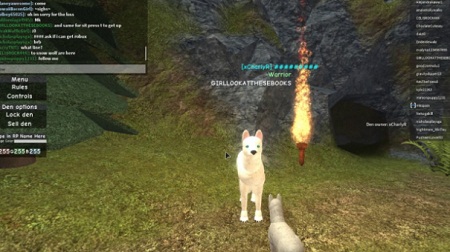 For those who want to try playing Roblox Wolves Life Beta, you can go straight to the official website of Rovlox. In the page of the game, you can just click on the green Play button. Before anything, please keep in mind that you will need to log in to Roblox in order to play the game. you can sign in to the platform by entering the username, phone number, or the email address, and the password.

In order to be expert while playing Roblox Wolves Life Beta, it is better for you to know the controls on the game. there are some controls that you have to know. The first one is to sleep. If you want the wolf to sleep, the first thing that you have to do is to click on the animations. In this case, you have to click on the wolf. Then, you have to click on the sleep command that is located at the bottom right of the screen. Apparently, the sleep option is the first one. By clicking that command or control, you will be able to make your wolf sleeps. If you are on the computer, you can just press Y in order to make your wolf sleeps.

The second control is derp sit. The steps to make your wolf to do the derp sit is similar to the steps to make it sleep. The only difference is you have to click on “derp sit” option instead of “sleep”. If you use computer, you can do it faster by pressing J.