VIP servers are private game servers in Roblox and it can be bought for participating games. If you decide to buy a VIP server, it means that you are able to decide who are permitted to play the game with you. This sever is able to be activated by making a place and VIP servers on. Also, you are able to set the price of the VIP server which is minimum 10 Robux.

How to Make A VIP Server

If you want to make a VIP server, the game developer must enable VIP servers for their game. If they enable it, so everyone can create a VIP servers by accessing the game’s page and then opening the Servers tab. This tab will show all running instances of the game and the players in each one. So, to make a VIP server, you are able to click on the Create VIP Server button and then you will be asked to buy the VIP server and give it a name. For your information, the price is set by the developer. Then, the server will automatically renew every month until cancelled. 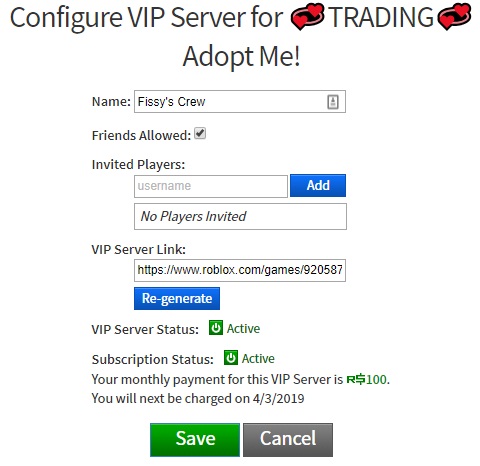 After you bought the VIP server, you can find it on the Servers tab of the game where it was bought or in in your inventory tab in the Places category. Both locations will display a screenshot and a configure button. If you click on Configure button, it will open a page to name the VIP server and set the access settings. In this page, you are able to:

If a player is given access to the VIP server, he will be able to see the server on the game’s detail page that is available under the Servers tab or in their inventory under the Places category.

How Long Does VIP Server Last?

If you want to know about how long do Roblox VIP servers last? From the search that we did, Roblox VIP servers will renew automatically every month and it will be like this except if it is cancelled. So, if you want to stop it, you just have to cancel it. But, on the another source, we found that for Roblox Jailbreak VIP server, it can last for 60 days.

What Are The Functions Of Having VIP Servers?

You may often see other people make a VIP server but you do not know what for it is. VIP server can be used for grinding cash but quite costly for most people. You can also farm as much as cash you can before the server is expired. The owner of VIP server can invite their friends or other people that they want to join the server to help them farm cash or perform other tasks. Also, the owner of the VIP server can kick whoever they want by using the in-game Kick button and choosing the desired player’s name.

Now, after you know about how to make it, the function and also how long it can last, you can decide whether you will make VIP server or not.