The term badge refers to the thing that is obtained by fulfilling a certain requirement. Some of them are made by Roblox, whole some others are made by the users of Roblox. They serve a similar purpose to achievements in games outside of Roblox. As the result, it is not uncommon for players to intentionally seek put as many badges as possible. There are even whole groups dedicated to badge-hunting. 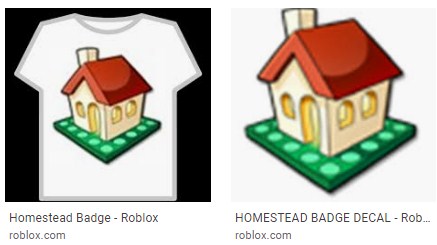 Roblox Homestead badge is one of the names of the badge. This one is given to Robloxians who obtain 100 place visits. Basically, this one is earned by having your personal space visited 100 times. All the players who get this one have demonstrated their ability to build the cool things that the other Robloxians were interested enough in to check out. You are able to get a jump-start on earning Roblox Homestead badge by inviting people to come visit your place.

How is the image of Roblox Homestead badge? The image of Roblox Homestead badge is like a coin. The color of it, gold, makes it exactly looks like a coin. It is shinning gold with some different shades of it. On top of that, there is a “100” on it in white. Below the “100”, there is a house or home image. The home is really simple. It has a door, a window, and a chimney. Just like “100”, the color of the house or the home is also white with a gold-brown color as the border.

The new image of Roblox Homestead badge described above is really different compared to the old one. The old one does not really like a badge. It is a home or a house but it does not have a round circle like the coin of the new one. the composition of the home is the same as the new one. it has a door, three windows, and a chimney. The main color of the house is cream. As for the roof, it is red. In addition, there is a green floor with some round shape on it.