In the game of Roblox Bee Swarm Simulator, there is a thing named Gummy Bear’s Lair. It is a secret location that can only be accessed by having a Goo Hotshot badge or above. By the way, how to get Gummy Bears Lair? If you want to get the lair, so you have to go on top of the big Gummy Bee on the Gummy Bee Egg Claim. Then, you have to use a Gumdrop.

You are able to get on the big Gummy Bee by going behind the Ant Leaderboard and following the path where you will also find a free Ant Pass. Then, you are able also to use a cannon, such as the Red Cannon, in combination with the parachute or glider. If you do not have the Goo Hotshot badge, then a message is going to appear on your chat: “Only Goo Hotshots can hear Gummy Bee…”. In addition to Gummy Bear and Gummy Bee, the Gummy Bears Lair contains the Glue Dispenser, as well as a shop which sells the Gummy Boots and the Gummy Mask. 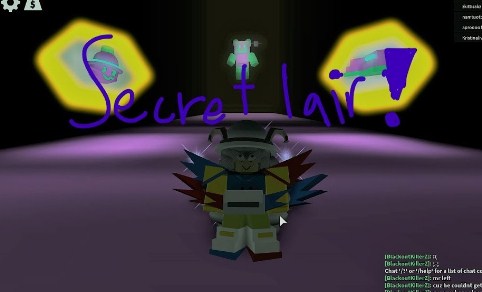 When you walk up to Gummy Bear, he will talk to you:

“A sweet and sour, ooey-gooey universe…”

After he finishes his speech, then the Gummy Bear kills you, sending you back to your hive.

Please do not go to Gummy Bear’s Lair if you have many pollen in your container because you will eventually die due to Gummy Bear killing you or you needing to reset your character. But, you are able to avoid that if you rejoin the game or by using a Micro-Converter to convert all of your pollen beforehand.

If you enter Gummy Bear’s lair, he sometimes fails to kill you. After you are killed by the Gummy Bear, so your body parts are going to slip down until you reach the end of the shop. In this case, if you press E at the right time, so you will be able to enter the shop, resulting in the Stuck in Shop glitch.